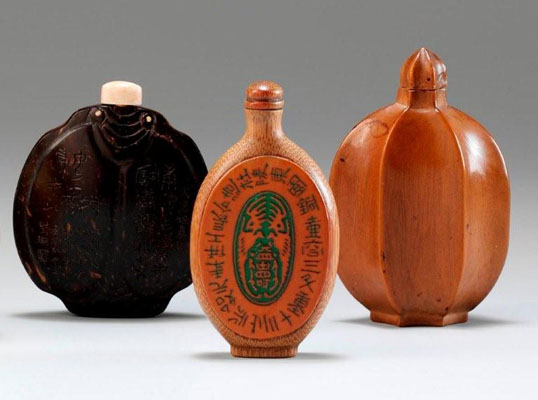 Amber is the fossilized resin of an extinct species of conifer. During the Qing dynasty it was made available to the Chinese from Burma in its traditional dark honey-coloured material and from the Baltic part of Russia in its opaque golden form.

Bamboo was a readily available material and relatively easily worked, lending itself to the addition of inscriptions of simple designs in the ‘iron brush’ technique.  It is also a light material, with a pleasing tactile quality, and takes the oils from the hand to shine up in a pleasing manner.

Lacquer is derived from the sap of the lacquer tree (rhus verniciflua) which is grown in Southern China.  The most common colouring agent was ground cinnabar (obtained from mercury) which gives lacquer its characteristic deep reddish tone. In order for lacquer to be carved, the item needs to be coated with some 150 layers before it reaches a sufficient thickness.  This tedious and time- consuming process resulted in the high value attached to lacquer bottles.