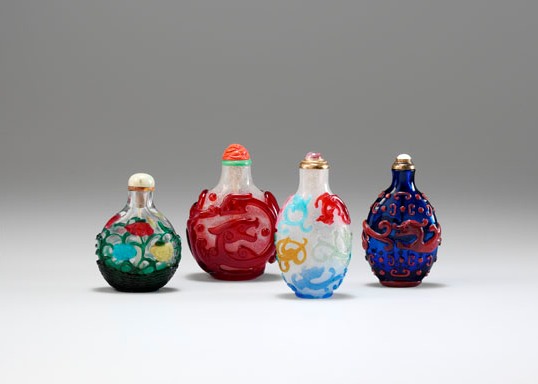 “Recently in the capital, snuff has been produced.  It is said to be able to improve one’s sight, especially to exorcise epidemic diseases.  The snuff is put into glass bottles, which are of varying shapes, in colours of red, purple, yellow, white, black, green and brown.  The white is clear as crystal, the red like fire.  What lovely things they are!  The spoon is made of ivory, used to extract the snuff out of the bottle to be inhaled, and then put back into the bottle.  The snuff bottles are manufactured by the Imperial Court.  Snuff bottles are also imitated among the people but are far inferior in quality and design.”

This statement, well known to all serious collectors of snuff bottles, was made by Wang Shizhen, a high-ranking minister of the Kangxi Emperor, in 1702.  This is the earliest known  reference to snuff bottles and confirms that glass was used for their manufacture ever since the introduction of snuff into China.  Other materials may also have been used, of course, but it is obvious from this quotation that glass bottles, in a wide range of dazzling colours, were  standard containers right from the beginning.  The Chinese fascination with glass, both at Court and among the common people, continued throughout the entire snuff bottle period.

Jesuit missionaries at the Qing Court were vitally involved in early glass  production;  in fact, the Kangxi Emperor’s glasshouse was built near the Jesuits’ house, on land given to them by the Emperor.  Their influence was therefore great, and they taught the Chinese artisans several glass techniques (the making of aventurine glass, for example)  previously unknown to them.   It would seem that after 1760, however, only Chinese glassmakers remained.

Although most glass bottles were blown, usually into a mould, many early bottles were carved from a solid piece of glass.  The carving of glass blocks as if they were hardstones was a common alternative to blowing the vessels, and often reserved for glass imitating precious stones, such as aquamarine, amethyst  and beryl. After the bottle was created, either by blowing or by carving, decoration could take any of several forms.  Some, of course, were left plain to show off the beauty of their colour.  Others were enamelled or engraved, both processes learned from the Europeans.  Those made of cased or overlay glass would be carved and polished.