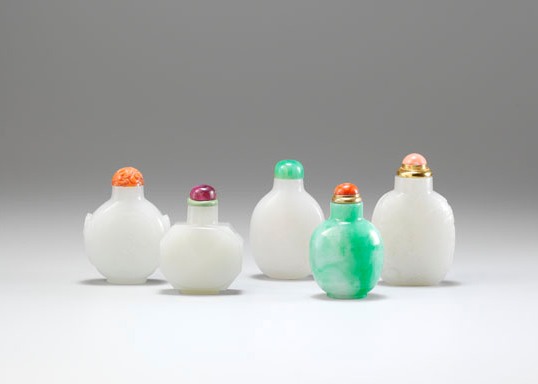 Jade is the quintessential Chinese stone and it has occupied a place of importance in China for several thousand years.  Valued far above gold or precious stones, it is held not only in admiration and affection, but even in reverence by the Chinese.

Although nephrite and jadeite are both correctly called “jade”, they are actually two different minerals.  Nephrite is usually of an opaque, creamy colour, and is most  prized when it is  pure white or yellow, although it is also found in other colours, ranging from pale grey to shades of green and black.

Nephrite  has been worked by the Chinese from their very earliest recorded history, and it is the material from which most ancient jade artefacts were made.  The main source for nephrite was the Kunlun Mountains which form the boundary between Chinese Turkestan and Tibet where it was traditionally found in river beds.

Jadeite is slightly harder than nephrite and tends to be translucent, with an icy, crystalline structure.  Jadeite’s variety of colour is almost as great as that of nephrite but it is renowned for its apple-green and emerald-green tones which are of gem quality. It can also be found in shades of blue and lavender which are not found in nephrite.   Although long considered a typically Chinese stone, no records have been discovered showing that jadeite is indigenous to China.  It has been available to the Chinese only since the Qianlong period when it began to be imported from Burma.

Jade snuff bottles were made in the Palace Workshops in Beijing, as well as in other places involved in the production of  jade carving.   The best known was Suzhou, a southern town, long famous for the skill of its hardstone carvers.

Snuff bottles are usually between two and three inches tall, and were meant to be held in the hand and examined closely.  Jade seems todemand touching and tactile appreciation.  The variety of colours, as well as the imperfections in the stone, provided inspiration to the craftsman, motivating him to create a masterpiece.