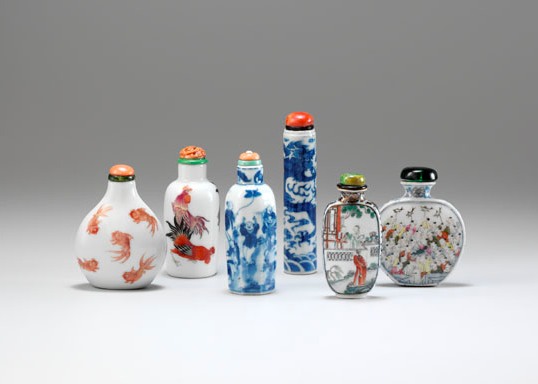 China is the birthplace of porcelain, and the ceramic arts have flourished more vigorously there than anywhere else in the world.  It is therefore somewhat surprising that porcelain was not used by the Court for the manufacture of snuff bottles until near the end of the 18th century.  This is possibly because neither of the two qualities for which porcelain was valued, its translucency and its sonority, was apparent in a small object like a snuff bottle.

Porcelain is composed of two basic raw materials: kaolin (known as china clay), and petuntse, a kind of feldspar which, when fired to a temperature of more than 1,280 degrees centigrade, produce a glassy and nonporous substance.  Both these components were available in abundance around Jingdezhen, in Jiangxi province, and this town became the centre of porcelain production in China during the Ming and Qing Dynasties.

As the snuff-taking habit began to expand down the social scale from the exclusive Court and literati circles, the relative cheapness of porcelain made it a natural material for the vast numbers of snuff bottles needed for the use of the population at large, and production of porcelain bottles then  increased enormously to meet the demand.

Porcelain snuff bottles can be simply moulded and enamelled, moulded with relief decoration and enamelled, carved and left unglazed or covered in glaze over the biscuit, or decorated in underglaze-blue or copper-red.

Perhaps the most familiar of all Chinese porcelain is that which is decorated in blue and white.  In the long history of world ceramics, there has been no single ware more appreciated and imitated than Chinese blue and white porcelain – it is perhaps the best-known category of all decorative arts.  Enormous numbers of blue and white porcelain snuff bottles were produced in the 19th century, and although it is rare to find one with a correct reign mark, many of  these bottles are delightful.

The potteries at Yixing, famous since the Ming Dynasty for tea wares, also produced snuff bottles.  The purple clay found in this area was thought to be the best for enhancing and retaining the colour, flavour and aroma of tea – and of snuff.