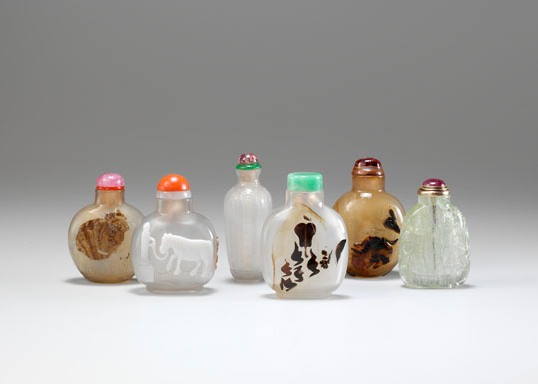 Quartz is one of the most common materials used to make snuff bottles.  The quartz family is a very large one, and embraces a great many different stones.  Crystal and chalcedony are the most obvious, but these can be further divided into several different types:  agate, jasper, amethyst, citrine, carnelian, etc.  One of the more interesting varieties of quartz is known as “hair crystal”.  The crystalline stone encloses “needles” of other minerals;  black needles are tourmaline, red and gold are rutile, and  actinolite is green.

The variety  of chalcedony known as “moss agate” or “dendritic chalcedony” has fern-like inclusions within the stone .

Because of the limitless range of colours to be found in the quartz family of stones, snuff bottle artisans  were able to give free rein to their imaginations, often with amazing results. Maximum use was made of the distinctive markings in the stone.  In many cases, this natural colouring was so striking that no further carving was required other than the actual forming of the bottle.  The stone was left to speak for itself.  When these bottles are beautifully made, perfect in line and form, superbly hollowed and with dynamic markings, they become exciting works of art.

Other bottles were decorated in “cameo” style:  the top layer of colour was carved away to leave the design in relief against a ground of a different colour.  Still others, known to collectors as “silhouette agates”, rely on the skill of the lapidary in selecting a piece of stone and cutting it in such a way that any natural inclusions suggest a design.  Usually a small amount of relief carving was needed to bring the design to completion.  Bottles of this type, when carved by a master craftsman, are among  the most dramatic of all snuff bottles.

Good hollowing of  all hardstone bottles is very important, but this is especially true of quartz bottles because they often have striking colours which can be appreciated only when the walls are thin enough to allow natural light to shine through.